An amateur football team raised eyebrows when they celebrated winning their local Saturday league by hiring an open-top bus for a ‘victory parade’. 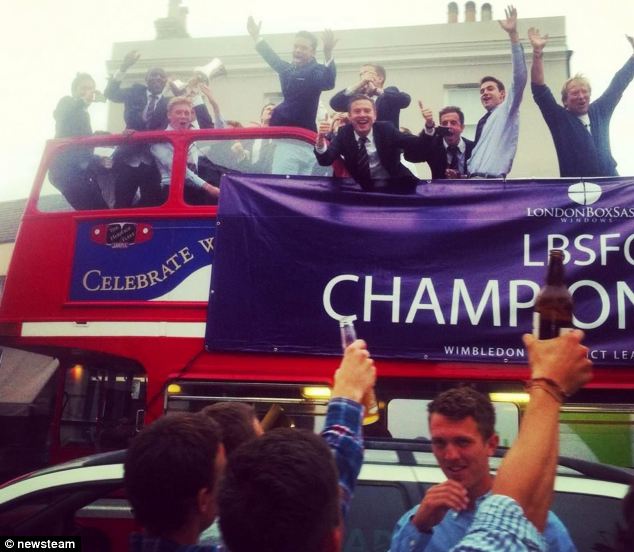 London Box Sash FC splashed out hundreds of pounds on their big day, enjoying a five-mile bus ride in front of all 30 of their loyal supporters.

Loaded up with balloons and specially-made banners, the squad knocked back champagne as their red open-top bus left their local Rose and Crown pub in south-west London.

The players then completed a circuit of Wimbledon, much to the amusement of the public, most of whom had no idea who the gents were. They were even joined by Chelsea legend Kerry Dixon on the way round.

The team arrived back at the Rose and Crown an hour later, after getting stuck in London traffic.

The men carried on their celebrations at a nearby restaurant where friends and family gathered for the club’s end-of-season awards.

Manager and captain Matt Cook, 26, said they had decided to pay for the bus parade ‘for a bit of a laugh’ – despite only having a handful of fans. He said: ‘Like our commitment on the pitch, we thought we would go that extra mile with our celebrations.

‘Not only did we have the bus parade, we also held the team’s player of the season awards – it doesn’t get much bigger than that for sporting occasions in Wimbledon. 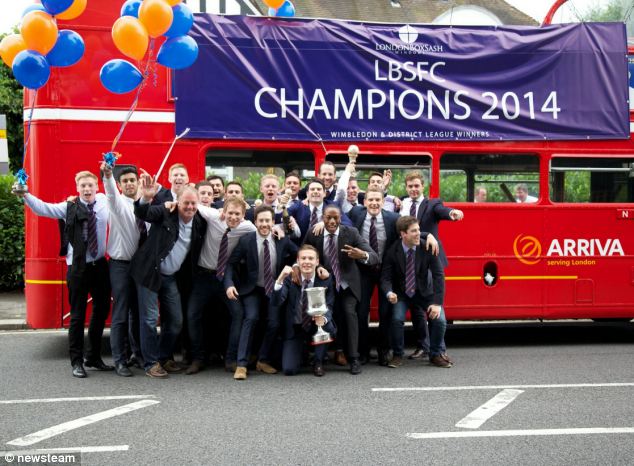 ‘We just did it for a bit of a laugh really, we haven’t even got a big fan base – just a man and his dog really. But we also raised a bit of money for charity as well by collecting on the way round.’

London Box Sash FC were only formed in August 2013 and ran away with the Wimbledon and District Saturday League Division Three title after winning 13 of their 16 games.

The team – which is mainly made up of former Leeds University students – scored a total of 61 goals on the way to the title.

Goalkeeper Patrick Ellis, 30, said: ‘The whole season has not only been a huge success, but a barrel of laughs. We’re a team of mates united by our love of football.’

As well as celebrating their success, the side also managed to raise a total of £250 for the Generations Foundation by collecting donations on their route.

The local charity help children who are disabled, disadvantaged, or struggle with ill health across the London Borough of Merton. 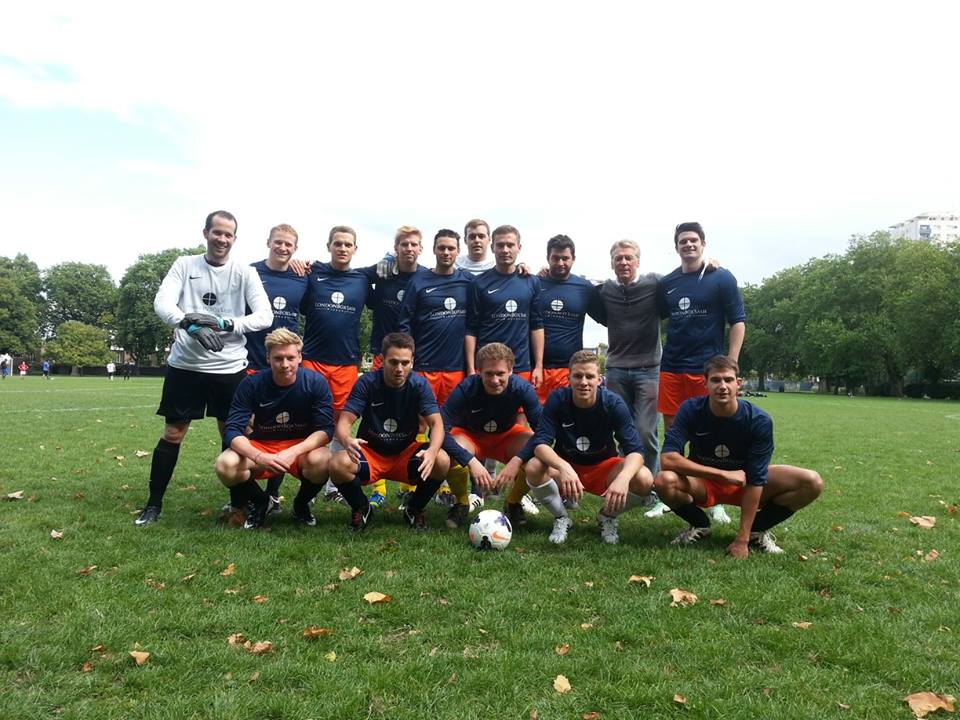 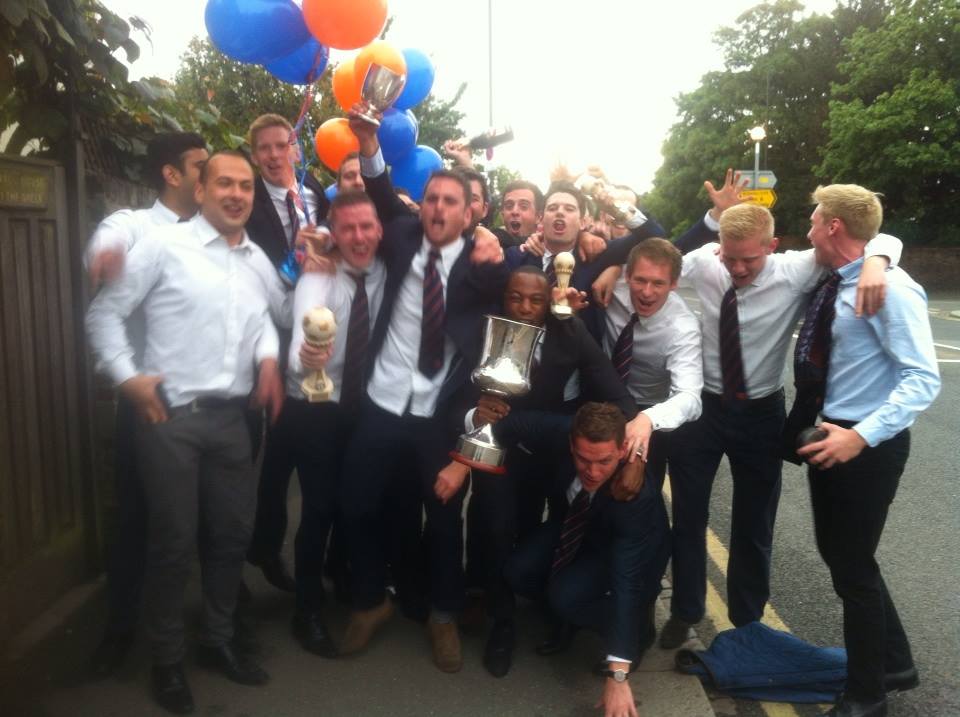 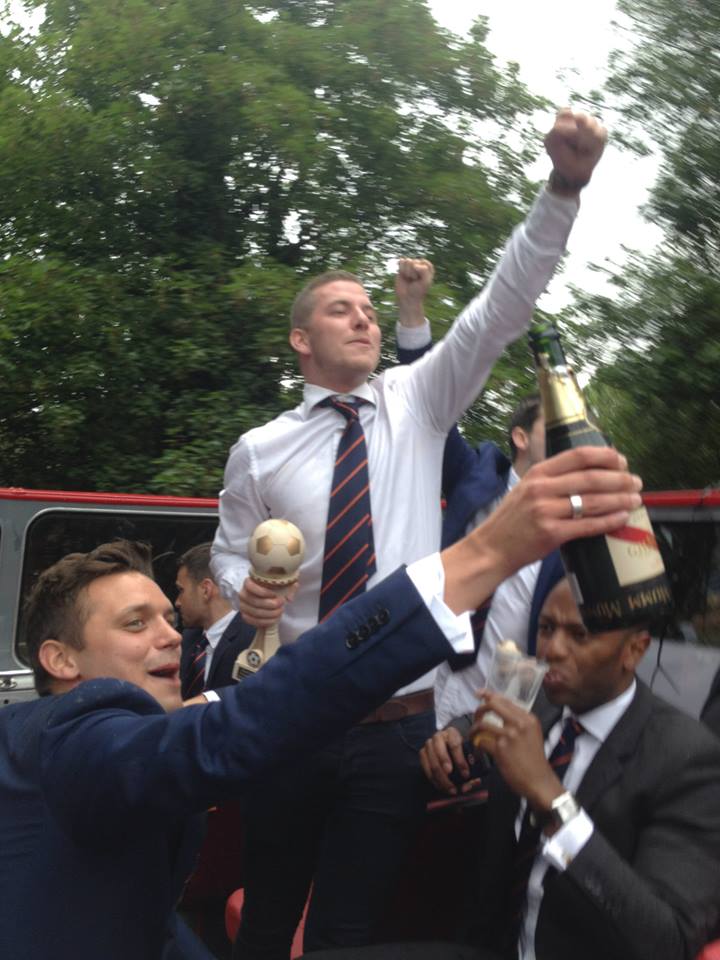 Bravo lads – this is how it’s done!